So this summer I learned a lot about Angular 5 and Firebase as a result of a school project.  I had worked previously with Angular JS, and so it was good to become up to speed on the ins and outs of Angular and typescript as well.

However, this post is titled “Vue JS” so you’re probably wondering, why are you talking about Angular?  I mention Angular as a point of comparison to start the conversation about Vue JS.  Vue (prounced “View”) is a pretty awesome new framework that has come out since about 2014 (https://vuejs.org/) and the Wiki Page. It was started by Evan You, who was a previous Google Engineer. The idea of Vue JS was to make a lighter framework to be able to “just do” what you need to without the bloat of Angular. The word “bloat” here is referring to the large amount of learning it takes to get tuned to Angular as well as the various libraries you need to get basic things going.

Don’t get me wrong, I love Angular in its own right. The NG CLI is pretty awesome, and once you’ve done 1 or 2 Angular projects you learn to think in terms of components for your design. Angular is also great in that so many things are already available. There are great NPM packages developed by people all over the place that make it really easy to find material on. However, it also is a bear to learn. There are a lot of ins and outs about just getting basic setups and routing taken care of. What’s more is when you start playing with different Angular versions then you run into compatibility. In the project I mentioned above I ran into a bunch of problems when I used Angular 5 with Firebase, and ended up having to revert my Firebase on my laptop back to an earlier version. Then also a lot of the documentation was written for the latest version of Firebase so I had to do some pretty extensive googling to find examples that lined up with what I was doing. Also as as a side note, on that project I used Angular Material and Bootstrap, which I also had issues with versions and compliance.

Getting back to Vue…its awesome. I say that because you literally can get up and running in no time. It also has a similar component type structure so its easy to build out your design and elements without having to do a lot of learning. There is also a pretty good wealth of YouTube videos and even professional “learn on your own” online courses that will get you rolling in no time.

The challenge with Vue I think is still just its age. Most of the big players are still rolling with Angular so Vue is hitting a fairly saturated market. However, I have to say amongst developers and the people actually building out the sites your viewing every day its being noticed.

I was going to write out a nice how to on getting started and all that but realized so many people have already done this. So I’m just going to provide a nice link to Traversy Media’s YouTube video on it. Follow along and you’ll get going in no time. He walks you through all of the basics and will get you to the point that you can be dangerous in about an hour or so.

Check out Vue and Traversy’s video. Well worth the watch. 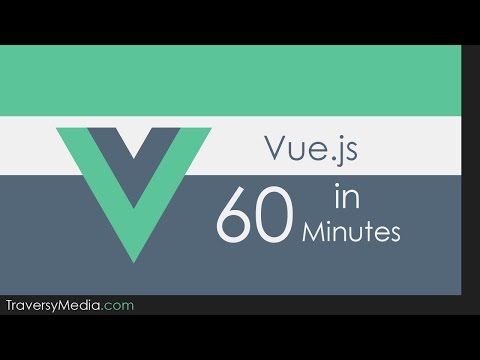