Recently we had a chance to shoot model rockets on one of the warmer summer nights. This was a lot of fun and I wanted to share some fun pictures, and also some general information. If you're new to model rockets, they're great for all ages and can be a fun hobby too. In this post I'll share my rocket and then some fun background info if you're interested in building a rocket of your own.

I've also got a fun video of me shooting off the "Goose 1" rocket, check it out at: 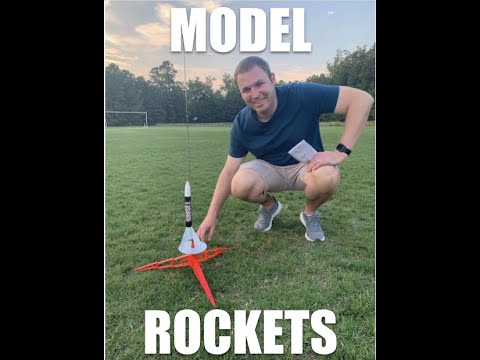 So for some background, we got this rocket because our local Hobbytown opened a store near us here in Richmond. If you're new to Hobbytown, they're a great store that offers everything from model rockets to robotics and more. They also have trains and RC planes as well. If you're interested, check them out at https://www.hobbytown.com/. I originally purchased the Estes Alpha III rocket kit. This is a great starter because there is very little assembly Required.

I then painted the rocket and added a custom logo. The name "Goose 1" is a fun play on the NASA space shuttle names. "Goose" is a nickname for my wife (I'm Duck if you were curious).

I also bought a starter kit that had the launchpad and controller. Finally, I also got rocket engines with recovery wadding. These are used to actually "launch" the rocket. So model rockets are fun because you basically just build them out of plastic and cardboard, and then use a very simple assembly of black powder and a starter to actually "launch" them.

The engine that I have pictured above is tightly packed black powder. The controller creates a spark which (from a safe distance) will ignite the rocket and launch it. When you buy engines, they come in classes that start with letters. The earlier letters meaning less powerful rockets (so a D rocket is more powerful than an A). The idea of "power" is really just thrust, as the rocket engine propels it upward. I recommend starting with a lower line (like the A8-3 rocket that you see here). The lower power means it won't fly as high, so this makes retrieving the rocket afterwards much easier. If you'd like to learn more about how the engine works, check out the wiki page.

The rocket itself also has a parachute that allows it to lightly land afterwards. This is propelled by the basic process when the rocket fires. The recovery wadding prevents the parachute from burning up as the rocket is launched.

So I had only previously played with model rockets in my technology class in High School. That being said, this was a really easy thing to build and setup. The only thing you really needed was some glue and paint (if you wanted to decorate it).

Since I decided to paint mine, the paint actually made the nozzle get stuck on the first launch. This prevented the parachute from deploying and basically sent the rocket down like a missile: That being said, once I saw this, I loosened the nozzle and basically freed it up so it would properly deploy when launched. This allowed me to launch the rocket a subsequent 5 more times.

I also didn't remember the purpose of the recovery wadding in the rocket. I only used it in the first launch, and unfortunately this resulted in burning a hole in my parachute.

However, all things considered this was a massively fun exercise. We had fun setting up the rocket and watching it fly. We also picked a clear evening and a large field. This was helpful as it meant wherever the rocket landed we could probably see clearly.

Since I burned a hole in the rocket's parachute, I decided to retire the "Goose 1" and made plans for a "Goose 2." My next rocket will probably be a little more advanced, and I might also try to go for a more powerful engine. All things considered, theres really a lot of fun in just watching it fly and land. All of my childhood dreams of being an Astronaut combined with my forever love of Star Wars made this a great experience.

If you do this yourself, I would recommend parental guidance for kids only because you are working with basically small explosives. That being said, the Estes kit I used (and most that I saw) have pretty clear safety guides and make it pretty easy to setup and launch. It's definitely a fun hobby for anybody that likes space or anything with science really.

I'll probably post more of my future rocket flying endeavors. Stay tuned to see how the subsequent launches of my "Goose" series of rockets goes.