Every year on 03/14 everyone celebrates "Pi Day." This is a reference to the math number and also Raspberry Pi.

I thought it'd be fun to write a short post to celebrate Pi Day. As part of my celebration, I also 3D printed a "Pi Trophy" object that I found on thingiverse. In addition to printing this, I also used a Raspberry Pi with the Camera Module to capture a time lapse of the print as it was happening on my 3D printer.

To create the time lapse, I setup a Raspberry Pi Zero W with the Pi Camera library. If you'd like to see how this works, check out my post Raspberry Pi Time Lapse.

In this post I just wanted to celebrate Pi Day and provide some fun background facts.

I created a YouTube video of my time lapse for my 3D print: 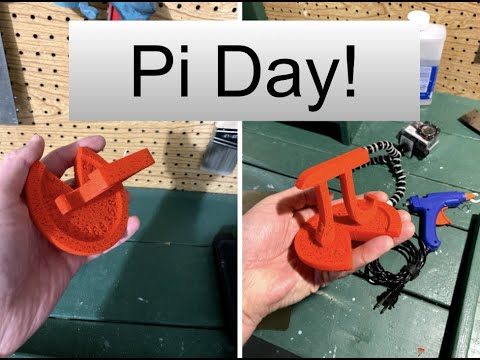 The number "Pi" is the ratio of a circle's circumference to its diameter and is normally equated to about 3.14.

You see Pi in many areas of Math and Physics. The use of the Greek later π representing Pi was first recorded by William Jones in 1706 (source wikipedia). The use of Pi as a number has been recorded across the ages, even back to ancient times.

The cool part about the Pi number is that it is actually the same for all circles! So this means that if you divide the circumference by the diameter for a penny its the same as a planet! Both always approximate to 3.14. This makes the standard number very powerful for applications in things like physics and math. The number itself has been traced across civilizations back to ancient times. If you'd like to learn more I recommend checking out the the Wikipedia Page and the Scientific American article.

The fun thing with Raspberry Pi's is that you can easily get into the world of the Internet Of Things (IOT), and connect with a great community of developers. The Raspberry Pi foundation also does a great job of providing tutorials and materials for folks new to computers. Its a great first project for anyone interested in learning programming or anything technology related. If you're looking to learn, I recommend checking out the Raspberry Pi foundation tutorials and starting with small projects. Since the main memory that the Raspberry Pi runs on is an SD Card, it is also easy to swap out entire systems if you wanted to.

I've done quite a few projects with Raspberry Pis and highly recommend them. If you'd like to see some of my Raspberry Pi projects, check out the following links.

Thanks for reading my post! I hope you enjoyed the video and get a chance to celebrate "Pi Day" today. Follow me on andrewevans.dev and on twitter at @AndrewEvans. Also check out Rhythm and Binary's new Twitter feed and YouTube channel. Thanks!